The Bogey on Android

This post chronicles a week-long challenge to port Katharine Turner’s The Bogey to Android so I could play it on my phone while waiting in line in my car at the school. The last time I made an app I set myself a time limit of one week. That worked really well and helped manage scope creep, so let’s do it again! 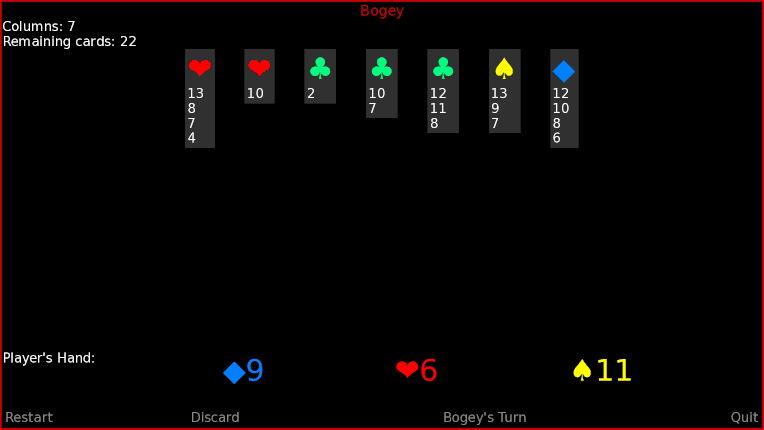 I was able to whip up a quick prototype in Ren’Py, it works great and Ren’Py makes .apk creation a breeze, however it is 14 MB.

After tidying up the code into two Classes and playing a few rounds I decided to add some basic loss condition logic. There was a question of how much I really wanted to try to automate the game flow, I wanted to err on the side of less.

The third loss condition is if there are no longer playable cards in the deck or current hand. One thing I learned looking into solitaire card apps for my own use is users are HIGHLY suspicous of apps cheating. So I wouldn’t want the app to declare a loss on cards the player cannot see. That means the third condition would not be checked until the player has reduced the deck to the cards in-hand. It’s not as useful as the other two checks so I put it off for now.

Now we have a fully-functional prototype with a somewhat clunky layout. 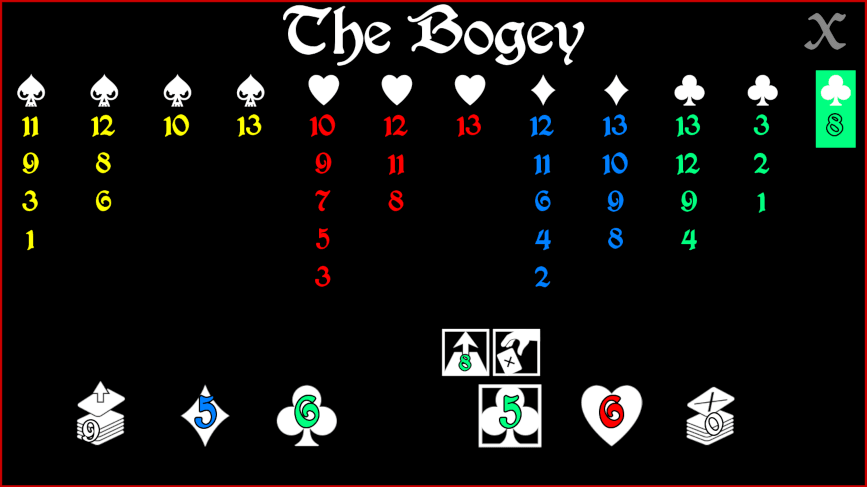 After waffling between porting elsewhere or using Ren’Py, I decided to stick with Ren’Py, which gives me a ton of GUI flexibility.

First thing is the layout, which is clunky af. Elements need to remain static (currently they move around depending on things like list size) and be placed in a way that is convenient for touch controls. A new stack is started by a double-tap, essentially, and otherwise the card is selected and the stack is chosen. Text is replaced with icons from game-icons.net.

There has been some confusion about what the heck a Bogey is, but it’s a fey creature of some sort and I decided to go with Celtic-knot style aesthetic. I was having trouble finding decent resources but openclipart saved my bacon on this one, and I was able to find 4 Celtic-like symbols that will work for suit replacements. The next step will be to either implement animations or allow the player to use drags, which would mean I needed less animation. I am not convinced adding drags necessary makes the app better.

After adding rudimentary score storage I found myself needing to chase down a few bugs, including a very perplexing one I could not explain where Nones were being inserted into the current_hand, which should only have card objects. I ended up simplifying the mechanism (back to add/remove list rather than flagging the card for later removal) and that seems to resolve it.

Unfortunately the Celtic font I found, which I otherwise really like, produces a very strange letter “w” and every time the win screen comes up it annoys me. Since my goal is to make the app language-independent that may not be an issue by the end of the week.

Lots of testing with a 15-card deck helped me chase down the last few bugs and I tried lots of irrational things like discarding when the game was clearly won, and so on. I felt reasonably confident the gameplay was solid at that point.

Next, organize score data stucture to strictly necessary data - date, columns, cards remaining - so it is more straightforward to obtain stats. I got lost in scoreboard design and styling for way too long.

Marlin offered to make music. I added a placeholder in the meantime.

And I woke up before the crack of dawn thinking, who needs sleep, and who needs gainful employment, when you have arbitrary app challenges?!

Two big ideas I’ve been putting off because they are more complex. The first is a function that reads the final hand and determines if the game can be won. It’s more involved than the regular loss condition check because the player might have cards that play off each other. The second is a way to undo the last move, which was something I wish I had when I made a few dumb taps while testing.

Up until now I’d been fudging the action bar positioning, I wasn’t sure how to get it to center up. It was important to me the action bar be centered over the selected card and I wanted a perfect mathmatical solution but I was never quite able to get that. I got something reasonably close with trial and error, and the best explanation I have is there must be some tiny amount of spacing in a style somewhere I’m not accounting for. But rest assured I spent WAY too much time getting as far as I did.

After that, decided to knock out as much stuff on my bug list as possible.

WHEW. Deployed to phone and tablet, phone promptly crashes (hooray). Tablet crashed later, also hooray because I caught the bug. I formally consider it done. …But of course it’s never done, now what?

Aaand that should be it, thankfully. 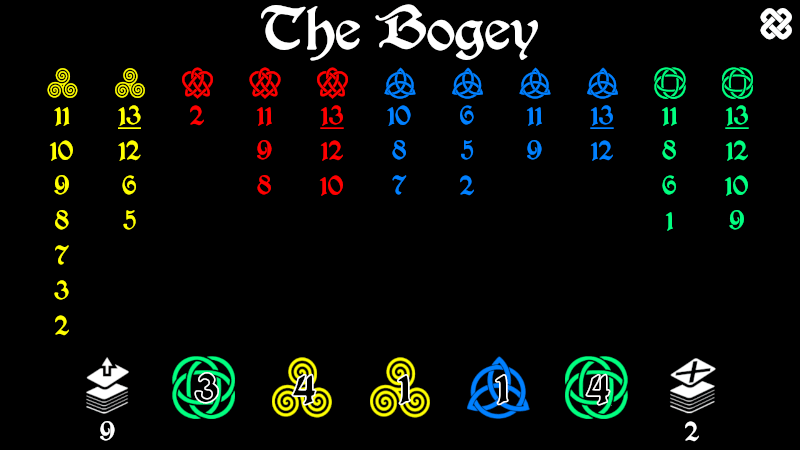