I’ve enjoyed Helionox: The Last Sunset so much I decided to further customize my build. I designed a pair of tracker dials for influence/infamy, then realized the base dial I was using conveniently has a negative number symbol so as long as influence doesn’t drop below -9 (max 9 infamy) I only need one dial. Dials can seem fiddly if you’re constantly adjusting them, but I get/lose extra influence tokens infrequently enough in a solo game it will be an improvement over tokens in this case. I used Horror Leader’s Tiny Authority Trackers for Star Realms as a base, Star Realms has a good variety of fan dials that can be repurposed for other games.

Hand-cut circles drive me bananas. I have a Fiskar’s small circle cutter that is almost impossible to line up right, so I print an entire sheet of number dials and figure I’ll get four (now, two) that look decent.

I added some foamcore to divide up the box into compartments for cards, with a larger one for bits and the tracker. I haven’t built the expansion yet, which is 81 cards, but I did verify the extra cards will fit in the current box beforehand. I made that mistake once (built foamcore box for Tournament Fishing, then acquired expansions later that didn’t fit). 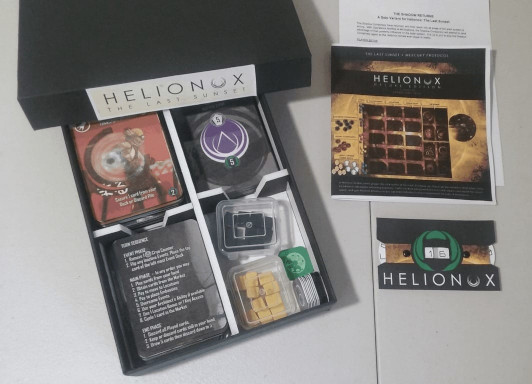 I’ve given up on making chipboard boxes at this point and sometimes thrifted boxes are more trouble than they’re worth. Helionox lives in a Kraft Frame Box from Michael’s. It’s not a telescoping box but stays reasonably compact on edge, it’s sturdy, cheap and can hold 4 double-decks in a quad formation. Print up some edge labels and you’re good to go. It doesn’t look like a professionally-printed chipboard box but it’s a solid compromise.