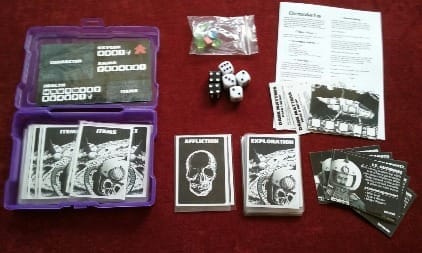 I finally got around to rebuilding Desolate, a solitaire sci-fi horror card game. I put a lot of effort in the first free PNP build because it was a game I could actually make look good on my dinosaur black-and-white laser printer, but I used inferior adhesive and the cards began splitting almost immediately. It was also my first build with a spray coating and the finish was uneven (and still smells, this was before I discovered the magic that is Mod Podge Matte Spray).

I found the game underwelming at the time. I bought the Dark Matters expansions to see if it would help, then realized the paid PNP cards were larger than the free PNP base game and I’d have to rebuild the whole thing, and put it aside until the PNP Arcade put the series on sale last week.

This time I went for a simple build, double-sided cards on 100lb index stock, cut and sleeved. I was able to cut in sets of 3, which saved a little time. As an experiment, I laminated the character and stat cards after they were already cut. It wasn’t terribly efficient but it was an okay way to laminate to a handful of cards on different sheets.

I got a weird bag of glow-in-the-dark acrylic vase filler at Dollar Tree early in the year. It was sold as a Halloween seasonal item apparently and I happened upon the last bag tucked away in the floral section. The little green gems work well as bits for sci-fi games and I use them for energy cells here. The dice were thrifted, as were the cubes (an old version of Risk). It all fits perfectly in a Recollections 4x6 photo case, which is now my go-to storage for small PNP games. Recollections Color Photo & Craft Keepers routinely go on sale at Michaels and you can sometimes get them for around $12 after discounts + coupons.

As I said, I kept putting off this build because I found the base game underwhelming. I’d heard the expansions helped but I wasn’t sure if it would be worthwhile to rebuild the whole thing. Well, after a couple of games I am pleasantly surprised by how much I’m enjoying the game this time around. Afflictions add an interesting penalty element and the character cards provide a sense of progression and goals. I decided to build the third expansion, Desolate: Insurgence as well. This is a multiplayer expansion. For solo players, the usable components are an extra character card with new mechanics, 6 items, and an exploration card that introduces the Scrap Pile micro-expansion, which allows players to build a power cell.

I kind of wish I’d done a full laminate build for this one, but not enough to laminate all the cards after the fact. I also wish I’d added a little color tinting to the card backs since they look so similar.