On Black Friday I picked up three one-sheet Paper Pinball games, the special editions of Sherwood 2146, Laser Sisters, and Wolf Hackers. I enjoyed them so much I picked up two more tables, Chromastodon and Goblin Circus (which is apparently so new there isn’t a BGG entry for it yet) and got a storage clipboard to hold the set. I have enjoyed these as quick-playing games with fun themes that let me chuck dice and puzzle over numbers without being brain burny. 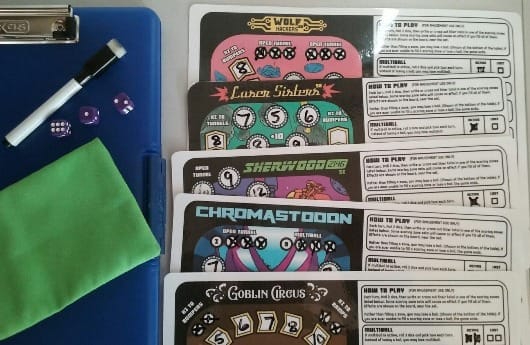 In the past I have mounted roll-n-writes on 120lb cardstock which, when laminated, is incredibly sturdy. For these boards I simply laminated 110 index. I cut Laser Sisters to the edge and didn’t like how it looked, so the rest I simply cut to the sheet.

Many people store one-page games in a binder, but since I laminate my sheets I decided to pick up a storage clipboard. I like it better, it’s a bit sturdier and I still have room for dice, a pen, and a small calculator.

Paper Pinball is in the wheelhouse of the Clever games. You roll a pair of dice, sum the total, and score it in various areas on the pinball table depending on certain rules. If you can’t score a roll you lose a ball. Lose three balls and the game is over.

You can score any value once in a bumper set. You can score ramp slots if the number is higher than the previous number, and you can mark off targets. Doing so eventually unlocks extra die and scoring bonuses. Each table has a twist. Chromostodon has reverse ramps, Laser Sisters has a slingshot mechanism that allows each die to be used individually, Wolf Hackers has a ball saver, Sherwood 2146 has a tilt mechanism that allows you to add or subtract from your roll, and Goblin Circus has magnets that allow you to ignore rolls and a jackpot at the end of a long ramp.

The scoring rules are not as clear as they should be, but fortunately the developer Metal Snail has clarified on the series itch.io page. I wish we had some sort of scoring chart for each table to give a general idea of how well one has done. As it stands, my highest score has been on Goblin Circus (596) and the lowest is Chromastodon (207). Goblin Circus’ Jackpot mechanism means you could potentially have very high score for that table.

The developer is currently releasing Paper Pinball Holiday Gauntlet, which is a series of 25 minimalist pinball tables, one for each day, on itch.io and PNP Arcade. I am intrigued by this but at the same time, the cool, full-color artwork and themes are what drew me to these games in the first place, so I’m sticking to the main tables for now.