I hadn’t built any games in a while and I realized my HP Instant Ink would rollover soon and I would lose pages, so this seemed like a good time to print off a few games. I now keep a list in Joplin so I don’t have to dig through the bazillion files I’ve secreted away like a small rodent hoarding precious nut meat for winter. 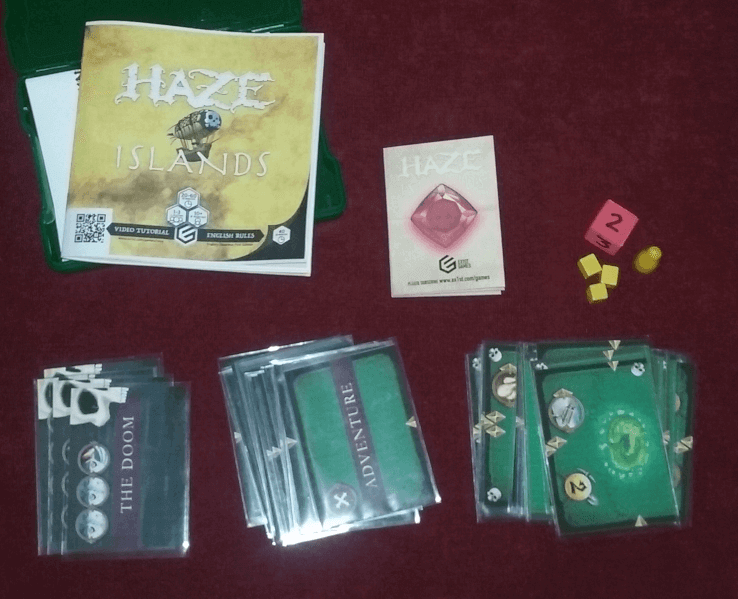 Charles Ward’s Haze Islands has been on my list for a while. The file determines the build, so in this case the original PNP file, which is a 9-card double-sided sheet flipped on the long side, works perfectly double-sided, cut, and sleeved. This ended up being a good choice for “lets use up pages” because it has a 28-page rulebook as well. The rulebook is beautifully formatted but just large enough to defy my preferred PNP storage containers. lovemyfire has provided a player aid booklet that is easier to store.

The components are basic, a die and 4 markers, one of which is a ship marker. The die tracks the Doom’s levels, which are 1,2,3,4,5 and 7. I’ve always found die counters a little fiddly (I prefer turning counters one side over, rather than opposite side) so I subbed in a foam cube with the correct numbering. I could not find any ships in my bits collection, let alone a pirate one, so I’ll keep an eye out. I ought to be able to thrift some kind of pirate game.

“You know,” an evil Devil-Satan voice rasped in my ear, “You could print ANY pirate ship, if you had a 3D printer.”

“Go to hell, Satan,” I said, and punched it in the mouth.

Everyone knows why people like me are forbidden from the dark arts of 3D printing. I will not be tempted now. Anyway, the game warns you the instructions take 40 minutes to read and recommends watching a tutorial first which seems a bit daunting for what appears to be a smallish card game, but I found the gameplay intuitive and I was pleased at how much I enjoyed this one.

This game is quite difficult in solo mode and I am nowhere near getting 30 points and defeating the Doom. darkyeoman has developed a Fleeing Fate Solo Variant, in which the player must evade the Doom at all costs, and being attacked by the Doom is an instant loss. My early scores are meager, to say the least, but I look forward to working on it and giving the variant a try.

I like the multi-use cards and have enjoyed this game. I wish I’d done a laminate build instead of sleeved cards because I can see this one staying on my shelf for a while.

I’ve been playing this game with two aspects from the solo variant rules above, avoid the Doom and collect at least 20 adventure icons. I have yet to win, but this balances the game out and feels much more achievable than the official win condition which puts soloists at a significant disadvantage. I looked through the BGG play logs and didn’t see any solo true wins.

The last turn the Doom has 7 power, so you have to make sure your map is spread out enough you can feasibly avoid getting attacked that last round. To get icons, however, it helps to have the map cards closer together so you don’t spend a lot of cards sailing. I have yet to find a good balance. In addition to this a healthy amount of luck is needed, the more playable icons on the board the easier it is, obviously.

Emptying the adventure deck advances the Doom to round 6, but I have yet to find a situation where prematurely ending the game helps. There is a solo-only action called Steal that you can use to gain a card icon that has the same icon as the current location. This would be useful if you needed 2 icons that are the same, but I haven’t had a use for it yet.