I decided to copy the Going Ashore enemy deck data to a spreadsheet just to see how long it would take. It only took about 10 minutes, so I went ahead and started setting up the cards in Nandeck. I ended up really getting into it (who, me?) and I’m really happy with how my preliminary card template turned out. 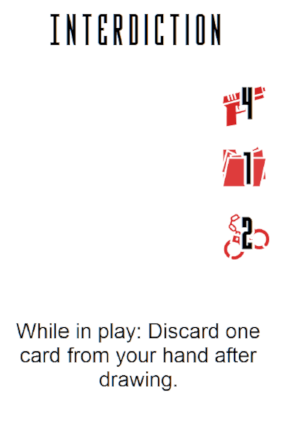 I used a X-Files-style font and switched out the icons. The layout is greatly inspired by Martin’s Wipers Salient Mandalorian retheme. The idea is that you try to arrest the various baddies (hence handcuffs) and “secrets” (the paperwork) make them more difficult to capture. Of course the gun represents attack.

Now, making these cards pretty requires 30 graphics and my original idea was the baddies would be unique. This is the part where I tend to get a bit weird about things and make them much harder than they are, so I am gonna think about this before I get started.

In other PNP news, today I saw CMON has released a full PNP of Xenoshyft: Dreadmire. This is a huge build with 30 sheets of cards, but it’s a big ass sci-fi deckbuilder that apparently plays fairly quickly solo and the file formatting is good with 9 cards to a sheet. At this exact moment however Miniature Market is selling the game for $20 in a “hidden gem” sale. This game would cost me about $10 to build, not counting my time expenditure, so in this case it would make more sense to buy and be able to resell it later if needed. It’s good to have options though.