Felbrigg Herriot’s Wipers Salient has been on my to-build list for a while, as I am always interested in solo deckbuilders. The game recently popped back up on my radar because Martin, a prolific PNP guild member, shared his Mandalorian retheme. I like the show and found this theme hard to resist, especially after Martin indicated he was going to create multiple enemy decks. 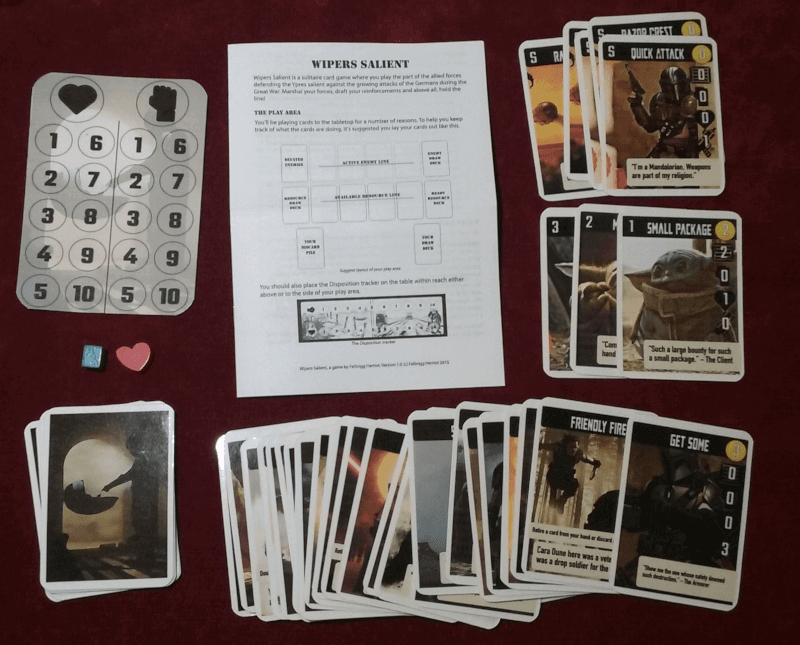 I’ve been meaning to find a easy, quick method for templating single card images. I hadn’t messed with Nandeck in a while, but a quick search led me to an example script for putting images in a directory into a 9-card layout. Search foo (and insomnia, it’s great!) allowed me to cobble together what I needed. The only problem is the .pdf generated had lines around each card image, rendering my cutting guides moot and making me unable to take advantage of the white borders to reduce the number of cuts needed. After experimenting with the C IMAGE flag for proportional cropping, I realized I could resolve this with the EDGE parameter.

Since this is Martin’s retheme it is fitting I use Martin’s laminate method for the build. I printed double-sided on 110lb index stock because that’s what I have, in 3mm sleeves laminated twice, then cut and cropped the corners as usual. I don’t think I’ve done a laminate build close to this size since Helionox, but this was only 6 sheets with no gutters so it was comparatively quick to prep and cut.

I have a love-hate relationship with mats in that I like playing on them, sort of, but dislike how cumbersome they can be and often find them tricky to print. I ended up passing, this game is efficiently designed and doesn’t need one. Without it the game can fit in my usual photo case.

This is an elegant solo deckbuilder that plays fast. There is a static enemy deck, the game’s variety comes from the large resource deck. Very compact, it reminds me a bit of Agent Decker in that regard, and I like how quick it is to set up and play. As you get familiar with the resource deck ideas for new strategies emerge, and the deck is large enough you may not be able to rely on any given strategy. (For instance, you might have a game where you never draw a card with a reject action, meaning you can never thin your deck.)

The game plays so quickly and has such a small footprint I can see it coming out whenever I’m in the mood to play a game but don’t have, as they say, many spoons.

I look forward to checking out Herriot’s Going Ashore, which is a World War II solo deckbuilder and I suspect may be a bit underrated. He’s designed quite a few PNP games, I’ve heard of Free Trader (4x, apparently fiddly) and Dune Express, which is not solo, but am not familiar with the others. I noticed his last release on BGG was in 2015. I checked out his blog, Black Dog of Doom, and it looks like he has since moved on to gamebook development and now releases primarily on DriveThru RPG.

I wonder how much the Mandalorian retheme has impacted my enjoyment of the game. I have a few favorite cards, like Cara Dune–is it because I love Cara Dune, or because it’s a great card? I thought about ways you could create a non-violent retheme. A cooking competition immediately springs to mind for some reason. Gordan Ramsay Salient, anyone? (I am sure someone somewhere has made a Hell’s Kitchen game.)