My enjoyment of Desolate landed several other Grey Gnome games on my watch list and when the base game for Iron Helm appeared on PNP Arcade I picked it up. It’s a kinda big build with about 120 cards but I like the artwork and am overdue for a solo dungeon crawler. 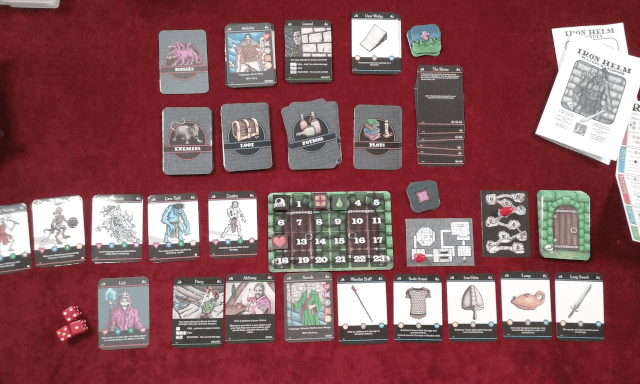 The cards are straightforward, double-sided on index stock and laminated. The game has a lot of tokens, which I dislike both because they are a pain to make and they tend to be fiddly for gameplay. The blessings are unique with matching backs but different fronts, so you could make mini cards. I ended up doing 220lb cardstock laminated blessing tokens, which are decently substantial but easy to make, and created a point track with Scrabble-tile counters for the remainder. That let me cut the components down drastically (the original build has 64 tokens and 2 D12s) so I was able to fit it all in my customary 4x6 photo case.

I made some modifications to the rulebook, as it used quite a lot of red ink for the cover. I can’t remember if I mentioned this before, I recently learned by selecting the Left (Tall) binding option in Adobe Acrobat I can print booklets that fit just right in a photo case. I also included benHaskett’s Iron Helper, a handy reference sheet.

This game barely fits in my usual 4x6 photo case. I’ll be keeping an eye out for something that would make a good deck box because otherwise I’ll need to (ugh) make my own. I detest making boxes, but I need space for at least 54 more cards in 3 expansions. Super Stacker has a 3x5 and 4x6 card boxes that might be doable.

I like this one. The draw-two-pick-one mechanic works for me. I enjoy the plot cards and I like the variability provided by all the items and skills. It is a hard game with a strong luck component, but it nicely emulates the feel of a dungeon adventure. The added complexity makes it more fun for me than Desolate, even though I generally prefer a sci-fi theme to a fantasy one.

The developer has plans to release bonus card packs every quarter or so. The first three are out, so I’m eagerly waiting for them to be made available at PNP Arcade so I can add levels to the base game. So far they have been 18-card packs that include a new boss and character, along with added plots, items, and enemies. I like the idea of Iron Helm being a game I can periodically return to as new content comes out. I particularly look forward to more plot cards.