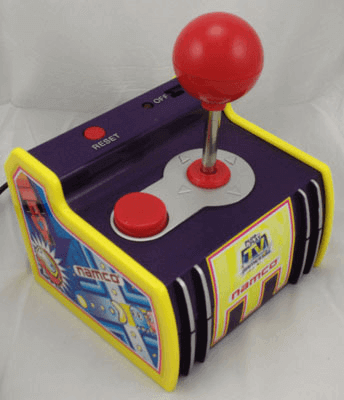 Events put the kabosh on my thrifting habits for a while but my favorite thrift store has implemented a strict mask policy and has little traffic, so I have resumed occasional visits.

I came across yet another copy of Dicecapades 1st ed for $3. I now have more of the Chessex-style D6/D10/D12/D20s than I will probably ever need for the rest of my life, so it was a pass. I would still pick up a second edition just for the cool colors.

I found an interesting little retro console called Plug and Play TV Games Namco for $4. It’s basic joystick that looks a bit like an old arcade cabinet with yellow/white coaxial hookups. I bought it because it looks neat and the joystick is nice and clicky, but usually plug-n-play consoles have really crappy controls. It is marked 2003 and is in good condition, the only issue was inside battery compartment. I cleaned up the corrosion (looked like the original batteries were still in there) and popped in four new AAs and it works great. It actually has good games, too–Galaxian, Pac-Man, Dig Dug, Rally X, Bosconian.

There is a companion unit, light blue, for Ms. Pac-Man. It looks a little weird by comparison and it has some extra buttons. I would pick one up if I could find it for the same price.