I finally got around to buying some (I hope) calcium supplement for my tank, as I noticed the bridgesii’s new shell growth seemed too thin. I was trying to find liquid supplement but settled for some crushed aruba shells, which the shop owner says he uses for shrimp and snails. I’d previously put some cuttlebone in there but was not convinced it was effective, though I have since read it takes it a while to dissolve. I tossed the bigger shells in the tank and put some smaller bits in the filter.

I also bought a calcium test kit but it’s for salt water and IDK man, I have no idea what it’s telling me, if anything. It’s the first API kit I’ve had trouble reading.

I picked up a second nerite snail, a tiger-eye. They look like this and they’re awesome: 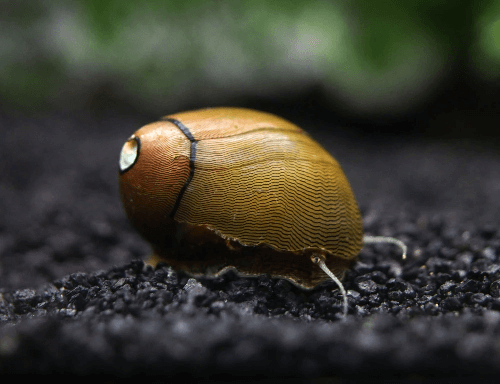 They had the most beautiful ivory bridgesii at the fish shop, very active. I am a little concerned about the bioload and I need to make sure the calcium levels are where they need to be, so it’s a pass, but all the snails in his tanks look good. I noticed he had a tag for assassin snails and asked about it, and he described how they consume other snails–by shoving their proboscis up under the shell and basically eating them alive like a meat grinder. THANKS I HATE IT.