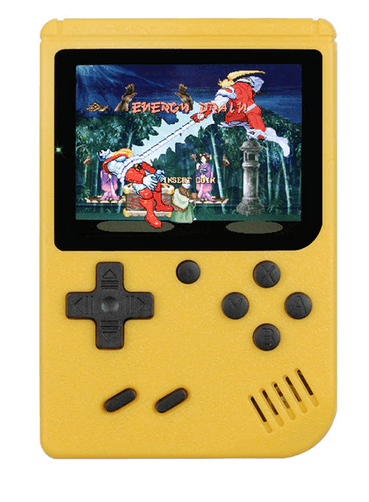 Several weeks after I found a cheap 268-in-1 handheld for $4 I find something better for the same price: a 400-in-1 with a Gameboy Pocket form factor. It has a much larger screen, a rechargeable 3.7v 1020 mAh battery, and a lot more NES games, including some hacks like Super Mario 14.

As far as I can tell this is a Retro FC, I won’t know for sure until I take it apart. It does not have any brand markings on the case which is why I was able to get it for the miscellaneous electronics price of $4. If it is a Retro FC then that means it can also accommodate a second player by plugging a controller into the micro USB port, which is a clunky but still interesting design choice. Had I known this at the time I would have also looked through the controllers to see if it had simply been boxed up separately.

The larger screen makes a HUGE difference and this device is much more playable than the 268 but it’s still not a very fun device to use. Like the 268, some of the games are duplicates. For whatever reason, the game list is not in alphabetical order, so you actually have to pay attention to the numbering if you want to find something.

Teardown here. Deets on dumping thanks to PeterVanSilie and others. Earlier model teardown. On improvements