I discovered the secondhand store sells old handheld games for $4, so I looked for something I could retrofit with an Arduboy.

They had one of the newer My Arcade Pac-Man Pocket Players for $17, which was perfect form factor but a bit rich for my blood, but they also had an old Pac-Man MGA handhelds for $4. This is the 2001 edition, and you’ll find these around on the secondhand market. It’s nearly 20-year-old toy so my expectations were low but I thought it would be fun to crack it open and get an idea what to expect from these devices.

It’s not terribly fun to play, but as I recall none of these old LCD games really were, and if it actually were fun to play I might feel bad about tearing it apart. 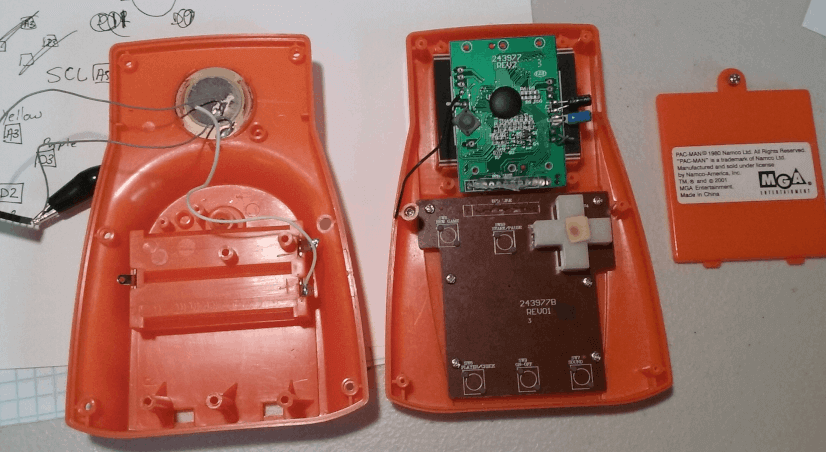 Inside the toy is showing its age but seems to be in pretty decent condition considering. There is rust on the 27mm piezo disc. The sound was bad when I played it, but when I wired it up to the Arduboy the sound seemed okay, but I was playing CastleBoy which only has a few tones.

I found the pseudo-joystick was a 4-direction switch with 4 pins, which means it can be mapped directly to the Arduboy without any library modifications. The button PCB BUS has 9 pins and the wires were easily exposed. I was able to determine the pinout by hooking it up to a Nano to check the analog signals.

One thing I learned from tearing into a Flashback Blast controller is it is best to use the existing button PCB if you can. So this toy has the bonus of not only providing all the buttons I need, but providing them in a way that’s easy for me to access.

The 4-way switch was a bit tough to register, though I found removing the D-pad cap and simply exposing the switch made it easier to trigger.

The screen space is 50mm x 40mm, or about 1.9 inches by 1.55 inches. More modern handheld toys, like the Pac-Man Pocket Player, are more likely to have a standard size screen.

There appears to be space in the bottom, below the battery compartment, to stash a Nano.

So all in all, for $4, I think I could definitely make it work for an Arduboy. The piezo disc should probably be replaced, and I’d have to decide how to mount a smaller screen inside the window but I have a protoboard that just fits over the screen window and could anchor to the BUS.