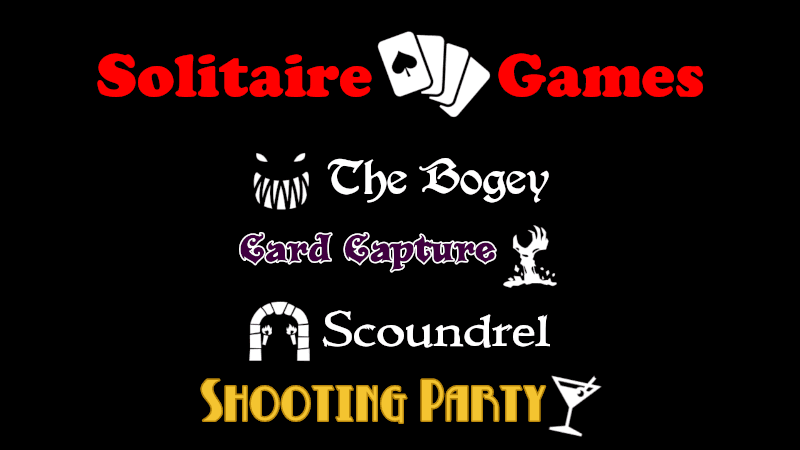 Several weeks ago I decided I would like to be able to play the Bogey on my phone. I couldn’t find an existing app so I gave myself a week to implement a fancy version, and did, and had a lot of fun with it. I enjoyed it so much I ended up porting 3 other card games: Card Capture, the Shooting Party, and Scoundrel. Since Ren’Py generates a 50MB app installed it made sense to combine all these into a solitaire game collection. Project notes forthcoming.

Ironically, the Bogey ends up feeling a bit like the odd one out because of the larger footprint (you can potentially have up to 12 columns of cards, and those can be 13 cards long). The other three games are comparatively compact deck-cycling games that can be played even on my small phone screen. The thing they have in common is they all have a small footprint, they play fast (5 minutes), and they all end up benefitting from being on mobile. They’re games that I wouldn’t necessarily sit down to play with a deck of cards at home, where I have access to many other games, but on mobile I’ll gladly tap away while I’m waiting in line somewhere.

The app isn’t finished but the games are polished and have been well-tested. I enjoy using the app and decided it would be a shame not to formally release it, so I’ll be releasing a free app in the next month or so. I need to implement some basic things like a splash screen and some sort of game-resume feature, but I also need to add instructions and credits. I made a point of only using CC assets and did an OK job of keeping track, but I’ll still need to hunt down a few things.

I’ve been on the lookout for similar vibe games to add to the collection, but so far I haven’t found any that quite hit that spot. I started working on Card Crawler, a dungeon crawler I have taken a real shine to, but has a larger footprint (a 5x5 card grid serves as the map) and feels different than the others. I’m not sure if I will finish porting it, but I don’t think I will add it to the collection. It’s a bit of a table hog but I can see myself setting it up at home to play every now and then, whereas with the other games, part of what makes the mobile implementation work for me is they’re so streamlined. I can play a few games while I’m waiting in line to pick my kid up for school (that’s what started this, in fact–I wanted new games to play while I was waiting in the school line!)

I’ve been mainly working off this geeklist, Solitaire games playable with a standard, unmodified deck of cards - Master List. For games to be eligible they need to be simple games that play quickly and require a minimum of table space. They must use a 52-card French deck and a minimum of extra components (Scoundrel requires tracking 20 points of HP which is the farthest I’m willing to go, I will also consider a single pawn as in Card Crawler). Games that benefit as apps are games that require a lot of shuffling or require the deck be sorted before each game. The Onirim App is a great example of a game that is well-implemented by an app.

Royal Assassin didn’t quite click for me, it feels like it plays itself really and doesn’t compel. I learned Overthrone: A Game of Cards last night and it might be a contender but I need to play a few more times. Kinga is next up.